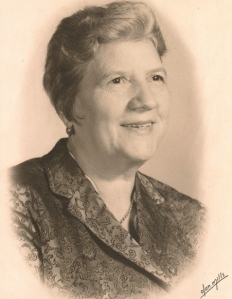 Carmela Pavonetti Vaccaro was the matriarch of one of the oldest and biggest families in the town of Eastchester. She had six children, forty-three grandchildren, and more than seventy-five great grandchildren, many of whom still live in town.

An Immigrant’s Tale   Carmela Pavonetti was born on January 2, 1904 in Bonefro, Italy to Ladislao Pavonetti and Rachele Pece. She was the oldest of six children. In Bonefro on February 20, 1925, she married Donato Vaccaro, who was also one of six children. Donato’s older half-brother, Tony Vaccaro, was the first Vaccaro to leave Bonefro for America. He prospered there, forming his own contracting business and building his home in Eastchester, New York. Under Tony’s sponsorship, Donato traveled to Ellis Island in 1917. He later returned to Bonefro to marry Carmela and conceive their first child, then traveling back to America alone, hoping to establish himself before sending for Carmela. He had apprenticed as a shoemaker in Bonefro, and opened his first, small shop on Brook Street in Eastchester. Meanwhile, in Bonefro, Carmela gave birth to their daughter Stella on January 27, 1926. Donato sent for them, and they traveled to America in June of 1927. Once reunited, Carmela and Donato soon conceived their second child.

For the next ten years, their family grew, and by 1938, Donato and Carmela, like both their parents, had borne six children: Stella, Rachel, Luke, Anna, Johanne, and Leslie. Donato’s business and reputation grew as well. Although he came from a small village where education was scarce, he was intelligent and industrious. He worked hard to teach himself English and to develop a rapport with his customers. He opened up more shops, one in the village of Scarsdale. Vaccaro Shoe Repair, founded in 1928, remained a family-run business and fixture in the community for eighty-three years, closing in 2011. Donato acquired land in 1928 and built the family home in 1931, 68 Bell Road, on a large lot in the north end of Eastchester. Donato had planned to build houses for his children on the remaining land, but in 1947, at the age of fifty-two, he died suddenly of brain cancer.

Carmela’s Generosity   In 1950, the town offered Carmela $68,000 for the land adjacent to her home, the land Donato had planned to build on. Carmela decided to donate the land to the school district, under the agreement that the land would be used solely for recreational purposes. The town accepted, and the land became Cooper Field, a playground at the former Cooper School. In the late 1970s, the closure of Cooper School left the field in danger of being developed. But in 1980, town officials negotiated an agreement to rent the property from the school district for one dollar a year, preventing houses from being built there. The field still stands today.

Carmela raised her family at 68 Bell Road, watching her children and grandchildren play in Cooper Field. Carmela’s son Leslie had fond memories of 68 Bell Road, including horseback riding on Cooper Field. He also remembered Carmela’s volunteer work at Immaculate Heart of Mary Church. “She went to church every day. She used to go to bible class. She belonged to the prayer group,” Leslie recalled. “She did whatever she could. She was very involved.” She was also involved in the Women’s Auxiliary for the Italian-American Club in the north end, helping to found the organization. Her grandson Donato (son of Luke and Corina Vaccaro), also born at 68 Bell Road, remembered, “When we were kids, she had chicken cages on the property there. It was definitely like a farm,” he noted, harkening back to a time a few decades before when much of the north end had been farmland. Carmela’s daughter Johanne Grogan added, “We not only had chickens, but many rabbits, ducks, and even a goat for a few years, and always a dog and cat. We had a very large garden that kept [Carmela] busy canning much of what she grew. And she loved children and did a lot of babysitting. We had a good life thanks to our mother, our father, and the good Lord who allowed it all.”

Carmela lived in that vibrant home on Bell Road for the rest of her life, passing on May 15, 2002, at the age of ninety-eight. She had forty-three grandchildren and more than seventy-five great grandchildren. The Vaccaro family is now one of the largest families in Westchester. Many family members grew up in Eastchester, several attending public schools and playing recreational sports there. In 2008, the property containing Cooper Field was officially named Vaccaro Park in memory of Carmela Vaccaro.

Written by Daniel Vaccaro, the great-grandson of Carmela Vaccaro, the son of Amanda and Donato Vaccaro, and a resident of Eastchester.

Circa 1920 in Eastchester, New York

Grandpa Donato Vaccaro came to America in 1917 under the sponsorship of his older half-brother Antonio (Tony) who arrived in the U.S. nearly two decades earlier in 1896 and worked as a laborer.  On weekends Tony rode a horse and buggy and picked up passengers at the Scarsdale station and drove around neighboring areas to show them parcels of land for sale in what is now Arthur Manor and Edgewood sections of  Scarsdale as well as  the north end Eastchester including Wilmont Manor.  In 1919 Antonio opened his own construction business and, ultimately, became a successful real estate developer commissioning a list of commercial and government building and roads.

When Donato first came to the U.S. in 1917 he lived for about a month on Mulberry Street in Little Italy, NYC. His brother Tony discouraged him and persuaded Donato to move up to the northern suburbs in the Town of Eastchester to live with Tony and his family.  In the photo above, Donato is standing in back, third from left.  His brother Tony is seated with wife Philomene.  Their six children are also shown in the photo. Seated from left are Lina Vaccaro Vedovato, Anthony (“The Vac”) Vaccaro and Mary Vaccaro Udice.  Standing in back are Emmanuelle (LuLu) Vaccaro, Luke Vaccaro and Danny Vaccaro.
In 1933 Antonio, with his son, Lulu, and his brother, Donato,  along with the help of several others, founded the Eastchester Italian American Citizens Club at the Cooper School.   It’s original mission was to help other Italians  to learn English and obtain their citizenship. The club is still going strong with an active membership today, participating in various civic functions including the sponsorship of scholarships to graduating seniors in the Town of Eastchester.
40.958333 -73.808611
Loading Comments...